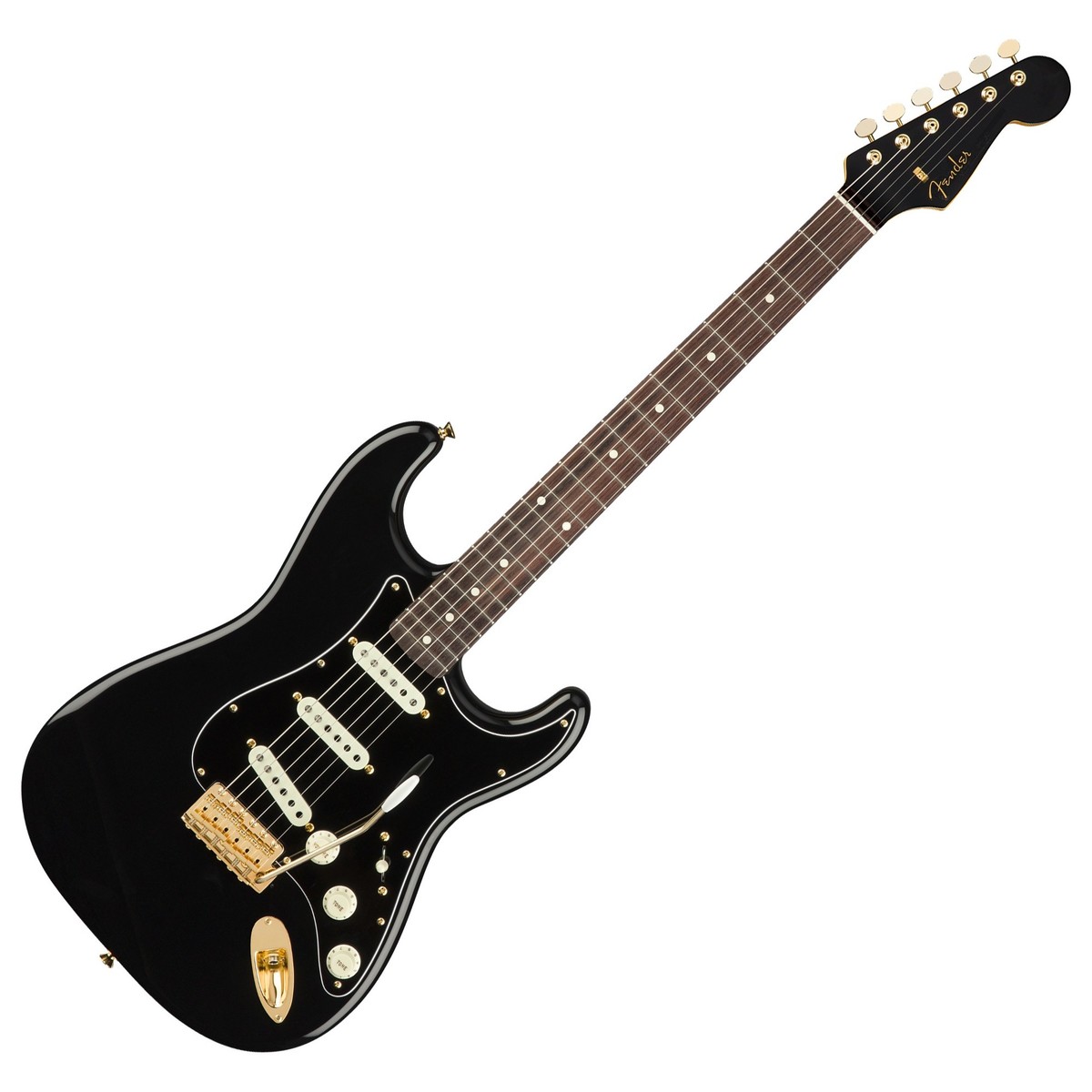 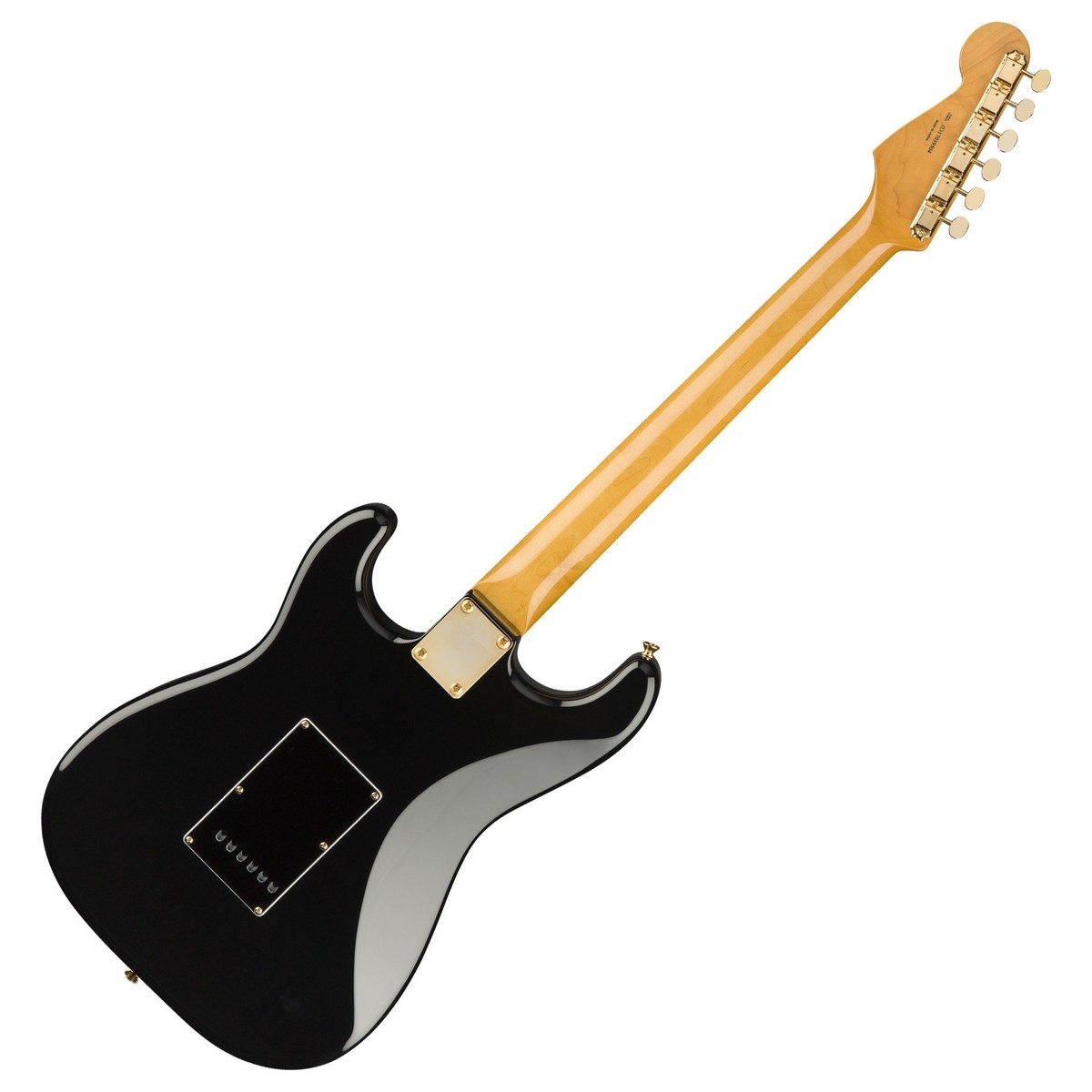 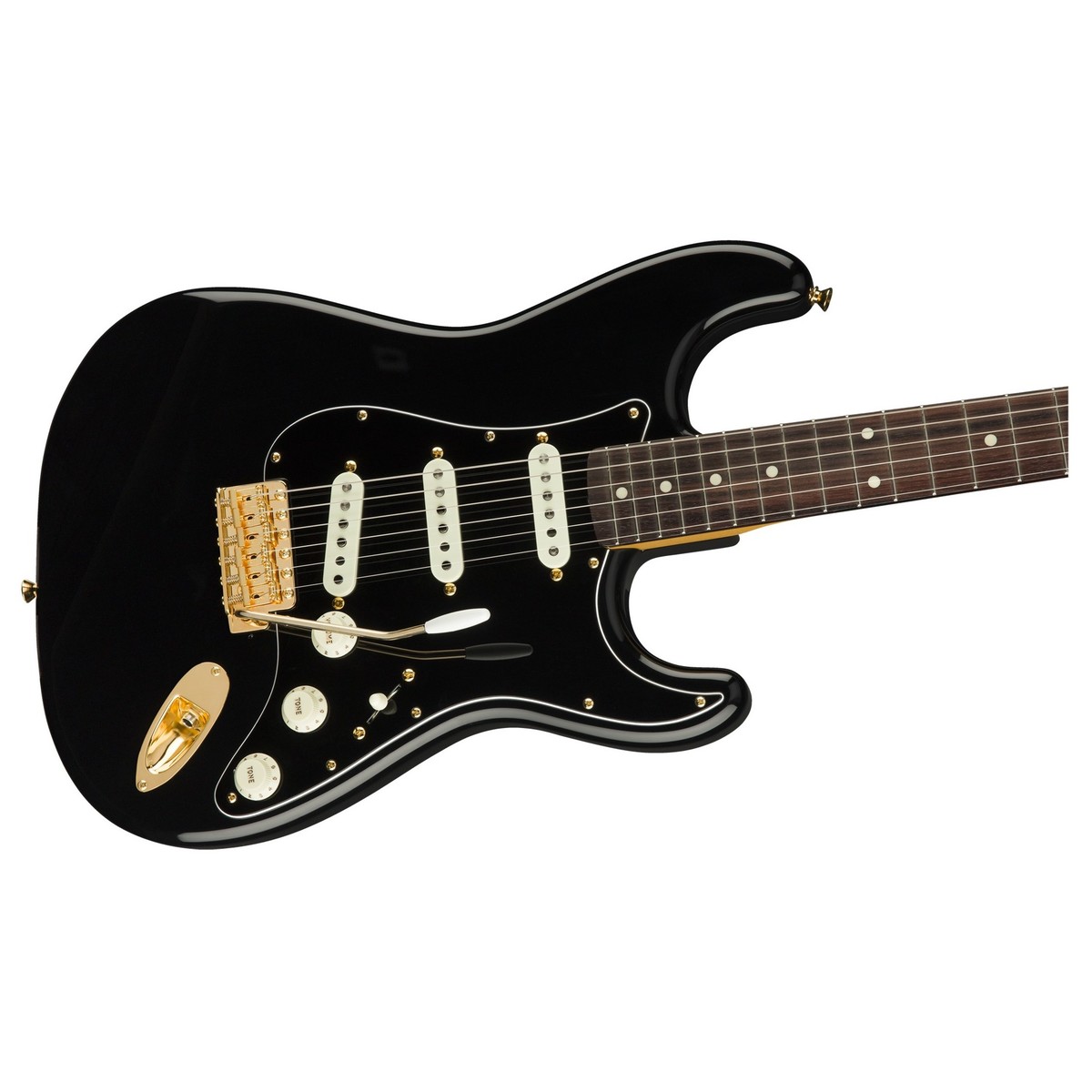 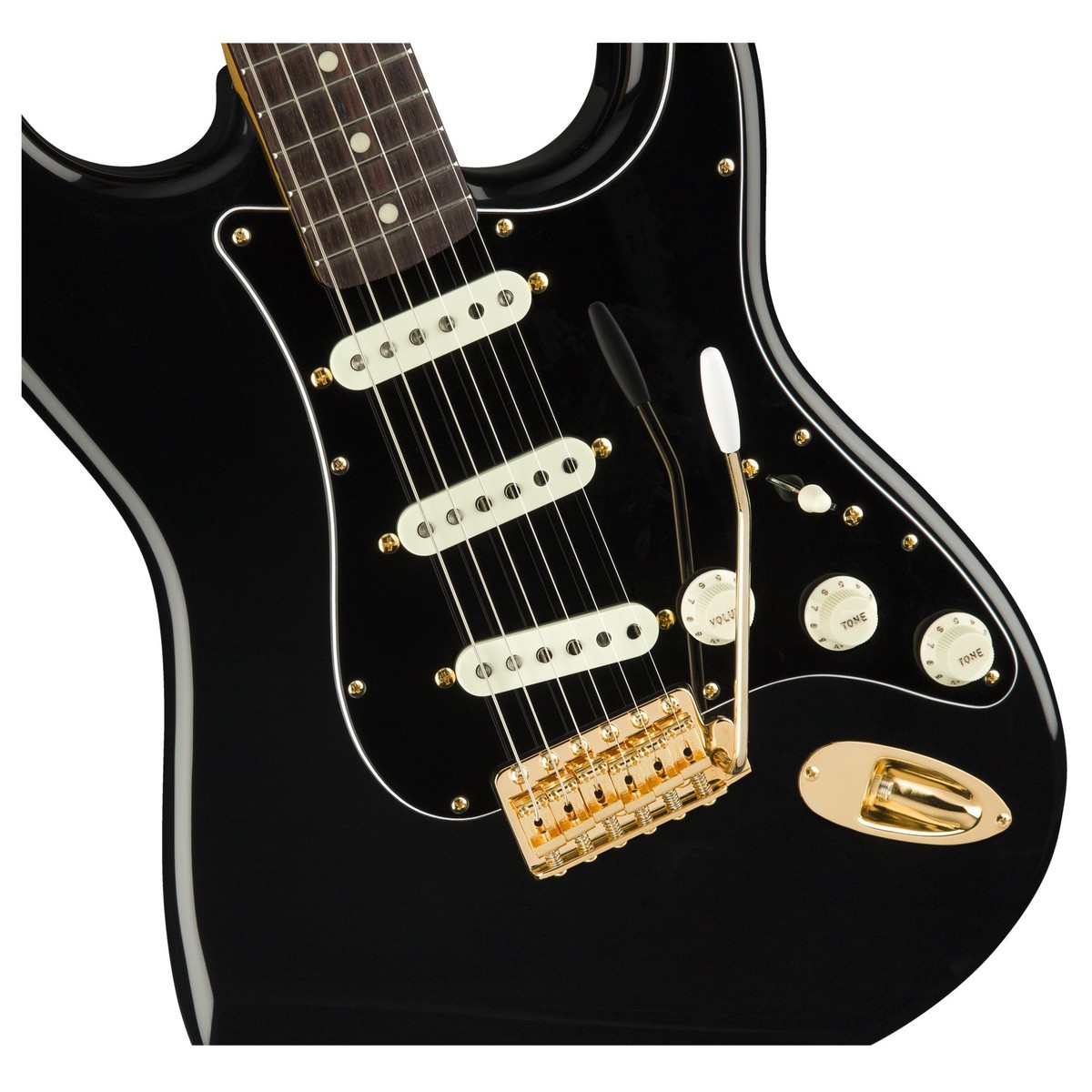 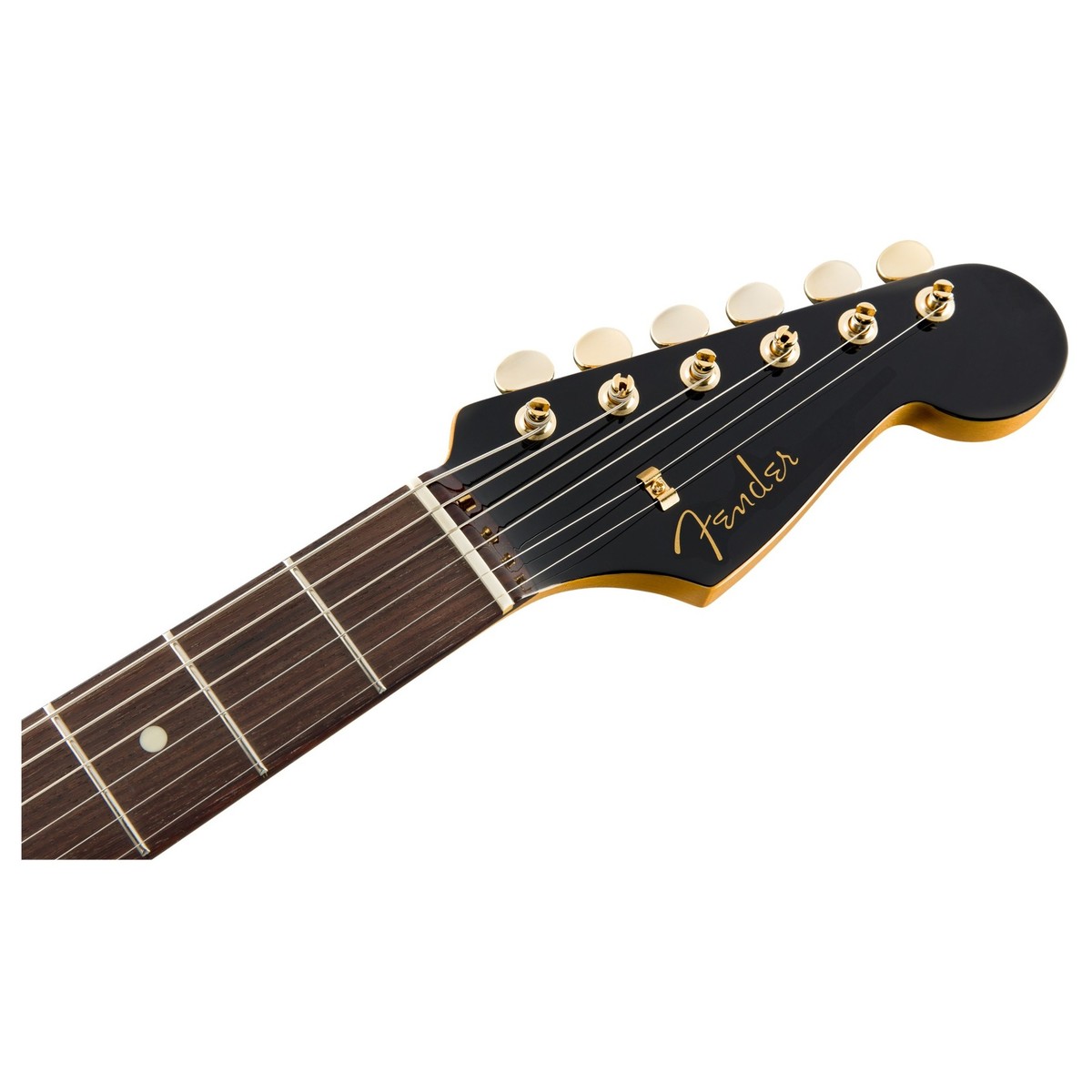 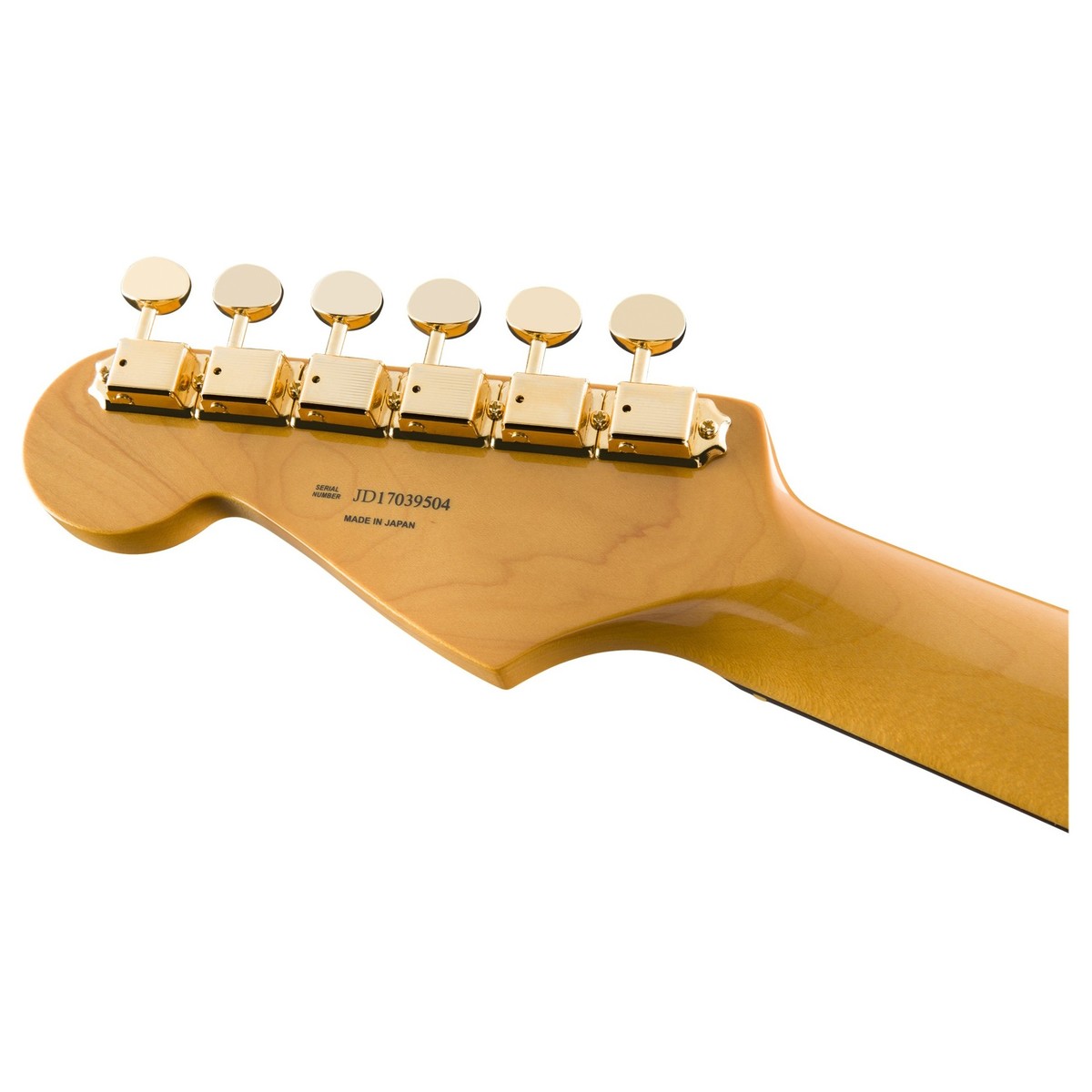 This product is currently not available for purchase

View this description in Finnish

Available for a limited time. Bringing a formal appeal to a classic design. The Fender MIJ Midnight Traditional 60s Stratocaster Ltd, Black takes you back to the rocking tones of the 60s. Equipped with a selection of vintage-inspired components to give you a traditional playing feel - without losing that modern reliability. You'll definitely feel classy with this classic Fender Strat.

For that traditional tone, the MIJ Midnight Stratocaster is fitted with vintage-style single-coils and synchronised tremolo. This classic combination was what gave the Strat its iconic performance - which was brought to light by Jimi Hendrix. Now, you too will be able to access the stunning tones that helped shape blues and rock 'n' roll.

Underneath its formal attire lies a lightweight basswood body, giving you a comfortable performance. Basswood is a great choice for the body, since it helps keep the overall tone balanced - perfect for playing a variety of musical styles.

For that traditional 60s playing experience, the Fender MIJ Strat is equipped with a classic ''U'' shaped neck. This neck profile was used predominantly on the Japanese made models, since it offered more comfort across the entire fingerboard for players with smaller hands than standard C profiles.

To complement its classic design, the MIJ Midnight Stratocaster is equipped with a set of vintage-style single-coil pickups to capture the rocking tones of the 60s. Sharp, crisp, and plenty of punch give you beautifully versatile soundscapes. You can deliver epic solos or produce massive soundscapes with ease.

Both vintage-style single-coils will transport you back to the era of sustaining soundscapes and bell-like tones, with plenty of punch and articulation to suit a variety of playing styles. Each pickup has their own tone control for extra versatility, while its high-quality switching gives you access to five classic start sounds.

A Stratocaster doesn’t feel complete without its iconic synchronised tremolo. The Fender MIJ's vintage-style bridge takes a page from the bridges of the 60s, creating a classic look and providing a powerful performance. It's also the same type of bridge that Hendrix used to create his unique sound.

The synchronised tremolo is better at creating striking pitch shifts than a tailpiece vibrato, since it not only changes the string tension but also the string length. Different string lengths results in a wider frequency range - more pitch shifting.

A Classic Look with Modern Reliability

For that added vintage look, The MIJ Midnight Strat features a selection of vintage-style hardware. They've also been given a gold finish to create a classy look that pairs beautifully with its midnight black body and headstock. While the tuners may look vintage, they still offer an incredibly stable tuning.

The additional bone nut also adds to the MIJ Tele's stunning looks while enhancing the tone's natural resonance and sustain. Bone is the perfect material for guitar nuts, featuring a long life and helping the overall tone remain balanced. This type of nut naturally self-lubricates, helping the guitar stay in tune for longer when compared to modern materials.

Fender 'Made in Japan'

The Made in Japan series from Fender introduces you to the craft and style of Fender Japan, providing you with one-off runs that embrace Fender's history. Fender Japan was first created back in 1982 to sell Fender guitars to the Japanese market. These were built in Japan to keep the price down to rival the Fender imitations that were being sold.

The History of the Stratocaster

When many people think of an electric guitar, this is the one that leaps to mind. The Stratocaster is one of the world's most popular guitars and is an elegantly versatile creation. in 1954 they debuted the Stratocaster, which quickly became universally regarded as the archetypal electric guitar.

Sleek and stylish aesthetics, smooth playing and tonally versatile, at the heart the Stratocaster remains a fantastic instrument. A first choice among players worldwide, there is simply nothing that sings, screams, whispers, moans, roars, rocks 'n' rolls like a Fender Stratocaster.

Select your country and language to see local prices and delivery options.